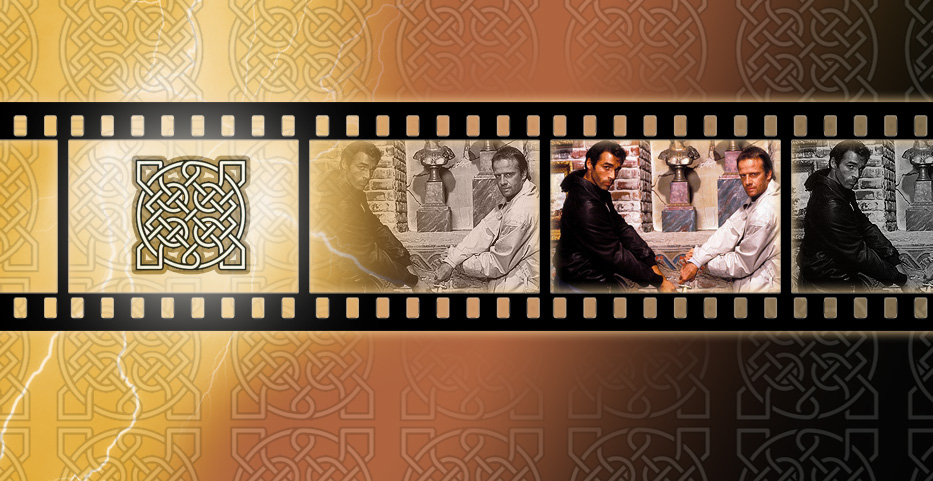 As Duncan MacLeod and his partner Tessa Noel enjoy their love-making in the loft adjacent to their antique store, a young street-kid named Richie Ryan breaks into the shop below. He is about to help himself to several of the treasures when Duncan feels the presence of another Immortal nearby. As Duncan grabs his sword, ready to confront the intruder, the man known as Slance Quince crashes through the skylight.

But which MacLeod has Quince has come for? It’s a different MacLeod that’s steps from the shadows… Duncan’s mentor Connor MacLeod who takes up the fight. Quince escapes and the stunned Richie is aware he’s stepped into something much bigger than he realised. In return for not pressing charges, Duncan convinces Richie to forget what he saw… but as Connor decides to stay for a while, it’s clear that Quince is simply biding his time. Which MacLeod will take him on next?

Despite the urban myth that The Gathering was not the first series episode filmed, the promotional tie-in Watcher CD makes clear that it was. [The Gathering’s production number is   #92-102-1].  Season 1 was filmed in what ‘The Powers That Be’ consider to be its proper order  – although the original US airing was sometimes shown in a different order.

According to Production Designer, Stephen Geaghan, the antique store and apartment were intended to be Old World in a New World environment — rich & textured.    He took literally Bill Panzer’s statement that with Highlander you never know what’s around the next corner, so the set was full of hidden corners and different levels; it went from Duncan MacLeod’s  jade-paneled office to Tessa’s wide-open studio.

Adrian Paul was the first person Bill Panzer and the casting crew saw for the role of Duncan MacLeod  but not the last. Four months after the initial interview, Adrian Paul auditioned and did a screen test; 3 weeks later he had the job.  He was the first  of over 400 actors who auditioned for the role of Duncan; Bill Panzer noted that “Adrian Paul IS the Highlander. He just knew it before we did.“

The tradition of there being slight differences between episodes that were shown in the US and in other territories is already there. One of the earliest examples was in this episode: Post-Production had to add more steam to the shower door to help cover what could be seen of Alexandra Vandernoot’s nipples.

Adrian Paul revealed that Duncan felt Richie’s buzz in The Gathering, but that  the audience assumed it was from Connor or Slan. In season 1, Duncan was unable to tell Richie about his destiny. [AOL Interview of Adrian Paul on 6-3-94, as reproduced in Peace #2 (“AOL”)]. The writers of The Gathering had most definitely decided that Richie was going to become Immortal. In fact, they wanted to do it in The Gathering (people on tone of the Highlander cruise events saw some test footage that proves it) but there was only so much that could be done in 46 minutes, so the idea was put on hold. Between then and the end of season 1, 5 more head writers would cycle through the show: some who wanted Richie pre-Immortal, some who didn’t, some who didn’t even know about the implication in The Gathering. So, a lot depends on which episode you’re watching.” [series staffer Donna Lettow posting on Rysher Highlander Forum in 1999, quoted w/ permission]

The series and the films had some obvious mythological overlaps, though not always consistently. In this opener, Connor conspicuously didn’t make any reference to his own wife Brenda; according to Highlander 1, they married in 1985, and according to Highlander 2, she lived until 1995. However that’s later contradicted by Highlander 3 — filmed after The Gathering — which said she died in 1987).
.