Richie searches for his true father and Duncan remembers the pain of losing his own... 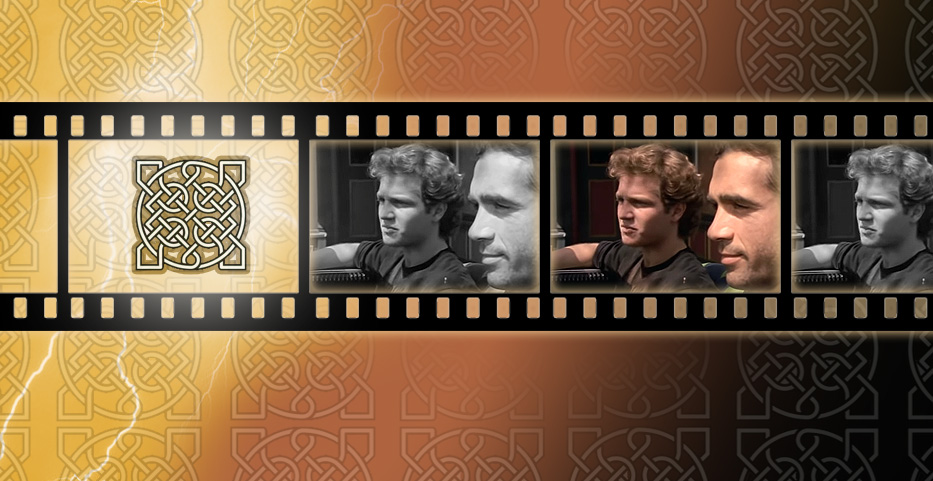 When Richie breaks into the Westside Adoption Agency to try to find out more about who his real parents were, he’s caught… but once again bailed out by Duncan. However Richie thinks he’s gained some key information.

Duncan has his own reasons for believing no good will come of it – remembering, all too well, the way he was treated by his father and ultimately banished from his own Clan centuries before. However Richie pursues the lead and meets Joe Scanlon. Joe has fallen on bad times and owes a crooked local casino boss and her henchmen $50,000. Noting that Richie has left a calling card for MacLeod’s antique store, Joe formulates a desperate plan to manipulate both Richie and Duncan…

Additional/Edited scenes for European versions of the episodes…

–Dialog between Mrs. Gustavson and Jack is longer, it’s more obvious that Jack is a crook , a con man –scene in stairwell of orphanage is much longer. The security guard (S) grabs Richie and throws him up against the wall:

S:  Hold it right there!

R: Before I answer that, Harold, have you had the mandatory course on the prudent and appropriate use of force?

S: Stop talking trash, turn around so I can cuff your ass. ( Forces Richie down onto his knees)

R: Harold! This is all a test of your security here. I’m an undercover agent with the Public Works Special Investigations Unit. ( Pause) These handcuffs are a little tight, Harold. ( Pause) But that’s OK. According to my stopwatch here, your response was well within our codes.  You should be very happy, Harold!

R: Harold, you forgot the file!

–scene at breakfast much longer. US version basically starts with Richie describing what he remembers of the candy store. Euro version, Duncan, Tessa and Richie moving around kitchen fixing breakfast. Duncan somewhat removed from the other two:

D: If I started telling you everything that ever happened to me. . .

T: Let me be the judge of that.

D: My father couldn’t grasp what had happened.

D: You know. . . I think I was more terrified than he was. (Pauses) We were a primitive people, superstitious. Fear ruled our lives. What lay on the other side of the mountains was beyond imagination.

T: Then can you blame your father?

D: ( Sad, still hurt after all these years) I did at first. There were days in that first bitter winter in the Highlands that I just wanted to die. ( Pauses, remembering, half-smile) But I couldn’t. ( Pauses, remembering, then pulls himself together) Well, my family problems are history. Richie’s are here and now. ( Approaches Richie) There is a proverb in Northern India: ” If you go hunting tigers, be sure you are prepared to find one”

–scene with Richie looking for candy store is longer –dialog with Mr. Stubbs in park is longer. There is dialog by Stubbs about remembering Richie and how he liked licorice, about always giving service with a capital S, about Emily dying so young only 30, and the authorities whisking Richie off to orphanage –guy beating up Jack at hotel is longer –talk between Richie and Jack, about Richie’s family/Jack’s past is longer. Nothing substanitive. –the end is  different. US version stops when Duncan tells Richie that he gets to choose who he is. Euro version: Richie is sitting in the recently re-tuned T-Bird – revving the engine. Duncan comes out, listens to Richie rev the engine.

R: Got it tuned up nice!

R: Kind of makes a statement.

D: And what am I saying when I make this statement?

D: (reaches under hood and engine slows down) Well, that is *your* statement. My statement is “I’m just passing through.”

R: Just passing through. ( Disappointed) You want me to tone it down? Hey, its your car. ( little-boy pleading) Just one more time?

D: ( reaches back under hood) Go for it! Richie revs engine, they both laugh.